This ride is coming up on June 4. Anyone going this year?
Hey Dave....any insights?
Aways put your brain in gear before you let the clutch out on your mouth.
Top

Meet at your place Hammer?
Aways put your brain in gear before you let the clutch out on your mouth.
Top

I'll be there, as usual. Likely not on 2 wheels though. Once again I'll be the guy roaming around all over the place with the camera. We'll probably head out Trenton way Friday eve sometime and meet up with Lou & company, Hammer & DD, etc.

This year is the shortest HHR, only going from Trenton to Port Hope but so far the OPP has indicated the ride will not be broken up into small groups like it has the past couple of years. Also that the entrance onto and exit off of the HoH will be guarded for us. By all indications from the Town of Port Hope, we may have found a new home here. They've been amazingly accommodating. The city counsel and local businesses have been supportive as hell and are really looking forward to the event. We'll have live bands & all kinds of stuff going on in Memorial Park. As long as we get a decent forecast, there could be as many as 3000 riders this year.

The Poppy Memorial will be there again. Also, at the National Air Force Museum the grounds will be open again so you can ride your bike right up to the planes on display for some really cool photo ops, for a $10 donation to the museum. There'll be all kinds of stuff going on in Memorial Park and around Port Hope. This year should be a great one.

Here's the postcard we've been handing out at bike shows & whatnot... "Some people are like Slinkys....
Not really good for anything, but they can still make you smile when you push them down the stairs."
Top

Boone...you got a PM
For some there's therapy, for the rest of us there's motorcycles.

It was a fantastic Friday starting with Lizzie & I driving out to Hammer & DD's place for a l'il pre-HHR meet up & supper. DD knocked it outta the park yet again with her Chantry Lasagna, that's what I call it! Rob arrived not long after us, Mal and Angie not too long after him. After supper we got a fire going, shared some drinks, stories & memories.. Mal and Lizzie serenaded us with dirty army songs. In the morning, Camper and Boone showed up. We all had coffee together then off for breakfast and to the ride.

Trenton & 8 Wing in particular along with the National Air Force Museum were amazing hosts and everything went smooth as glass thanks to the hard work of folks like Wayne Mackey marshalling the thousands of bikes that arrived. Early estimates of the bike population in Port Hope is somewhere between 2500-3000.

Port Hope was possibly the best destination the HHR has seen. The only one I can think may be better was Trenton, the year the ride went backwards. But personally I hope the ride ends in Port Hope every year from now on.

Below are a few pics taken at Hammer & DD's place and a couple I shot from the bridge over the 401 Highway of Heroes on the Brighton overpass. Of note are the Royal Canadian Legion Branch 100 Colour Guard who stood and saluted the entire ride.

The most heartwarming moment to me was the elderly gentleman in the tan sweater. He is a retired Navy vet with 30+ years in then an additional 25+ years on the police force. His health is very obviously failing. It was a chore for him making it from his car to the bridge. The heat didn't help. But he did it and he stood there and waved and saluted at each and every bike that went underneath us. It was all I could do to keep from getting misty. If shit like this doesn't fill you with pride and compassion, you're just not human. This man is what this ride is all about and I couldn't be more proud of having met him and being a part of the HHR.

This was a totally awesome day and event. Everything went off without a hitch! Port Hope is a beautiful little town and we all felt very welcome to be there!
Thanks to Hammer and DD for putting up with us the night before and Mal for his repertoire of army songs!

Here is a pic of the rally point about an hour before we left...

Great ride, great day, great friends! I left a little early because I had some family and a bottle of whiskey waiting. Wished I could have stayed for the ceremonies but hopefully next year.
For me this was the best Heroes Highway Ride yet.

Aways put your brain in gear before you let the clutch out on your mouth.
Top

IF YOU DON'T STAND BEHIND OUR TROOPS & LEOS - FEEL FREE TO STAND IN FRONT OF THEM !!! 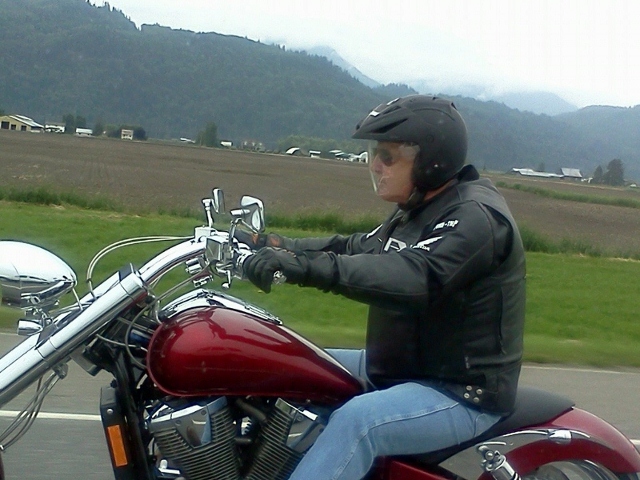